Every skater needs to experience Barcelona skateboarding. This city in Spain is one giant skatepark. It is the most interesting and amazing terrain for skateboarding. The culture is spanish and fun. As a tourist I had a great time!

I believe it is a must to go to with your skateboard. The architecture and plazas seem custom built for skateboarding. There is a culture that loves community and outdoor gathering spaces. Famous for the architecture of Antonio Gaudi and more.

Barcelona had the Olympics in 92 and that probably added to the great plazas and public spaces in the city.

Every corner, every Metro stop has a surprise skate spot. You could spend months checking them all out. I only had three days... it wasn't enough.

Skateboarding is Not a Crime

In December 2005 I traveled there to check it out. I showed up at a unique time. This is the flyer written in Spanish, outlines what was happening. I don't know what it says: 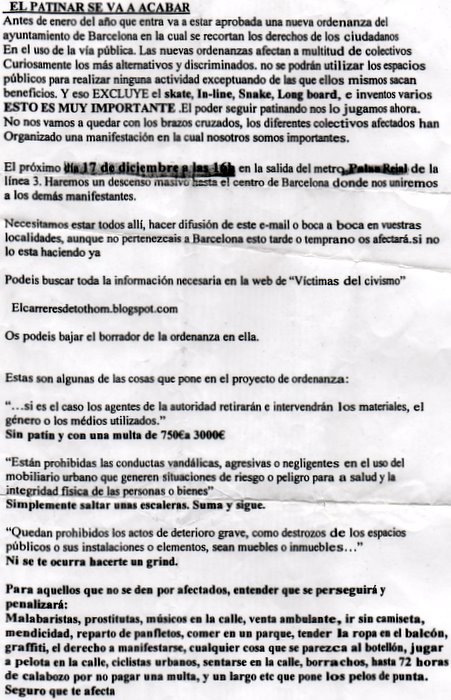 Up until that time skateboarding was allowed in public spaces. The police sort of let it go on. The public had no problems. The great spots were a free reign for skaters the world over. That doesn't mean the there wasn't the occasional police raid. MacBa or the Museum of Contemporary Art Barcelona is a popular spot for skaters. It would get cleaned out by police from time to time.

The law about public activities and skateboarding was being changed. The government was passing a law that would make skateboarding illegal. A skater could be given a ticket for skateboarding. 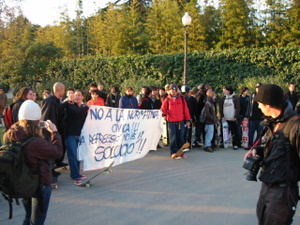 The skaters were ready to protest this law. I joined a group of hundreds skaters mounting a protest. We met at a plaza near a university and traveled as a big group of skateboarders. A critical mass which is a gathering of skaters to ride the streets in a large group. They "take over" the street and show the public that they belong and increase awareness.

More than a hundred skaters gathered and rode together through rush hour traffic. Down a main street to a central area of the city called Universitat. Another famous skateboard spot. We rode in solidarity. 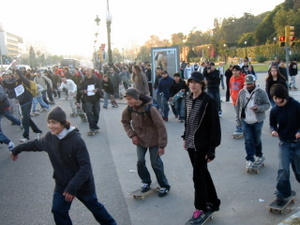 It was an amazing experience to ride with many people of whom I did not even share a language. We traveled through lights and streets and traffic making our presence known. The sound of thousands of skateboard wheels rolling all at once was awesome.

To look forward and back and see streets filled with skaters is something I will never forget.

I was lucky to be there at that time

It was fun to be there. I skated and partied a lot on that trip. We lived up to the independent attitude that is commonly pinned on skaters.

It turns out that the law was passed but the police never enforced it. So the skateboarding continued. Barcelona Skateboarding Rocks!