Nollie - A "nose" ollie. Doing an ollie with the nose of the board while rolling forward in normal stance. Popping off the front of the board. Check out the detailed ollie page and learn this solid first. 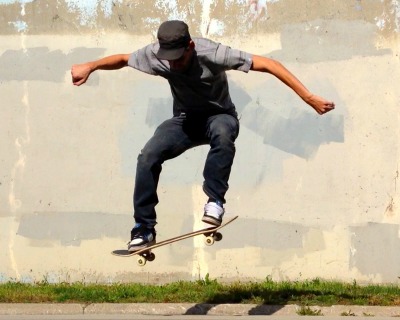 A nollie is popped just like an ollie but from the front of the board. It is a great variation of the ollie. Once you get used to doing them they pop easier than an ollie but don't go quite as high (at least not for me). The forward rolling motion makes it easier to pop the kick of the nose down to the ground than with an ollie.

I find that it is more difficult to get height wit this trick. You are using your opposite feet to do the popping and catching so the coordination maybe a little trickier. Just like a switch ollie. Try fakie ollies. They are the same motion except your are rolling fakie. Confusing at first I know.

Tricks you need to know

You need to be able to ollie and do the basic skateboard tricks. A solid foundation in the basics of skateboarding will make this trick a cinch.

To set up for a nollie:

Just pop like you would an ollie. The steps are very similair and if you know how to ollie then it won't take too much to figure out this variation.

Since you are popping the front of the board and not the back you will need to change your timing for a nollies. This is the tricky part. If you want to pop them over something you need to do it really early. At least a board length early.

To get down a set of stairs or on to a ledge you need to pop early and stay in the air for a while to land where you want.

I find it helpful to do a bit of a shifty when in the air to get over things or up gaps. Then landing on my back truck and straightening back out. This more advanced tweak really helps keep the board up in the air.

It is tougher to point a nollies with that front foot because it is the one that is lower. You have to tweak with the back foot and sort of point the front. This is a tough technique and I certainly haven't mastered it.

Get your ollies good then get out there and start popping nollies.

Pop hard and pop many. Don't worry about landing it too much at first. Just try and get that pop timing down and the snap really hard.

Nollies are a great trick especially when you start doing nollie variations. They are much trickier than an ollie but keep at it. Soon you be able will add all the nollie trick variations to your skating. That nearly doubles the possibilities you can try fro trick. Although the difficult is a lot higher. Keep trying!