Noseslide - A slide with the nose of the skateboard on the edge. 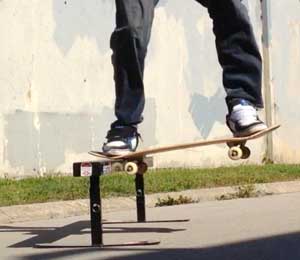 To do a noseslide you must put all your weight on the nose and slide. During the ollie you pop from the tail and then shift all you weight to the nose to land on the edge.

At first it will be helpful not to ollie into this trick and try it into a stall. The weight shift from the tail to the nose is key. It will take time to get this and be able to ollie into a noseslide.

Once locked in this is a stable trick. The nose of the skateboard is flat from side to side. Unlike a boardslide where you need to balance on the concave of the deck. You will be doing many of the same things that you learned with the boardslide. The major difference is where you land and how much you need to shift your weight.

I will describe the backside noseslide.  Where you are looking and sliding forward. The balance and body positioning is much easier than a frontside noseslide.

You will land on the nose and slide on the deck, wheels and even some of the truck. The board position is key to letting you slide. The wheels are grippy and if they rub the edge at the wrong angle they will stick.

Getting your weight shifted all the way to the nose after an ollie is a challenge. I will describe a slappy version. Where you ride into the trick without popping an ollie. Putting the front foot on the nose before you pop. It makes for a sort of sloppy jump but if you get in and slide it won’t matter.

It is helpful to practice a straight on nose stall on a curb before you try and slide it. This gives you the feel. The weight transfer is the trick. Master that and the noseslide will be yours.

Nose stall on a curb

The balance and board control you learn with this trick will pay off on more advanced tricks. Learning how to keep the wheels from sticking by under-rotating is the key. Many other skateboard tricks need this kind of subtlety. It took me years of watching good skaters to notice this technique. Once I tried it sliding tricks became easy.

As you get better you can start putting some pop into the tail and getting onto higher things.

Do the nose stall a lot before you start trying to slide this trick. That will get your weight and control just right. The more time you learn board control the better off you will be.