Skateboard Hardware isn't very interesting. But you need them.

Skateboard hardware holds the trucks onto the deck. They come in sets of 8 countersunk bolts and 8 lock nuts. The are usually 1" to 2" long.

Old hardware was longer. Like 2"long or more. It had to be long enough to hold the risers and any other junk that was used on the skateboard.

When skateboard style started to change and the board shape became double kicked hardware took a beating. Doing noseslides and tail slides starting wearing away the nuts on the hardware.

The bolts on the base plate where too close to the edge of the truck. Leaving the nuts exposed to the wear of skateboarding.

The solution was to change the hole patterns on the trucks and the decks. The holes closest to the nose or tail were moved away from the edge about a 1/4". This innovation kept the nuts from getting chewed and worn down.

For a few years you would get decks and trucks with both hole patterns. This was done so you could always fit you trucks and decks together. Eventually the industry dropped the old hole pattern and now you just get 4 hole for each truck.

There are a few options for how to fasten your board with different types of hardware.

Allen Key or hex head bolts are the best. The shape of the hole makes it resist stripping. The L shape of the allen key makes it easier to hold when tighting hardware. A plus is you usually get an allen key included with your set of hardware.

Phillips or star is the most common bit. It strips more easily and doesn't last as long as the allen key. 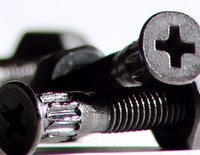 Hammer in hardware comes with a flat head and teeth that grip the deck. The top of the bolt usually has some sort of pattern on them. I like them and the were easier to put on. You had to have a hammer handy though. Eventually I got bored with them and switched back to allen key hardware so I didn't need a hammer anymore.

Bridge bolts were around a while ago. They connected two bolts together into one piece. This would make it easier to install because you didn't need a screw driver. Also you only needed 4 pieces instead of 8. The problem with bridge bolts was the they did not sit flush with the top of the deck. This left bups on the deck and could mess up tricks. It was also sort of uncomfortable if you landed on it hard.

Base plates Some skateboard truck brands make base plates that hold the nut so you don't need a wrench to install the hardware. This would be more convenient. I haven't used them or seen them in the stores. I suspect that they are heavier due to the extra material need to hold the nut. 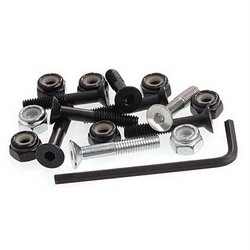 Shown here is a useful innovation. Using different coloured hardware as front markers. Shorties Silverados come with two bolts that are silver in colour with the rest being black. You place the silver bolts on one part of your board so that you can see the difference between the front and the back. I like them and I use them.

I can usually feel the difference between the front and the back when riding but it helps to have that added hint that the bolts show.

Bolts that are neon coloured or that have skulls and other stuff on the heads are also available.

You can really customize with these and the price isn't too much different.

You need them so go with it. If you want to customize then Go For It. You can decide what to get to make you board your own and impress your friends.