A skateboard jump ramp is a curved ramp made to launching you into the air. Getting air on a skateboard is a lot of fun. It allows you to grab, flip, tweak, spin and go over stuff.

There isn't much to say about a launch ramp. They curve or transition like a quarterpipe. The curve is usually pretty mellow at larger than 8'-0" radius. Boosting you off the end of the jump ramp with a lot of speed.

A jump ramp gives you air to land to flat ground. The higher you go the tougher it is to land back on flat ground. Jump boxes in skateparks are a combination of a jump ramp flat deck and an opposite facing bank to land on. The bank lets you land easier from higher heights and speeds. 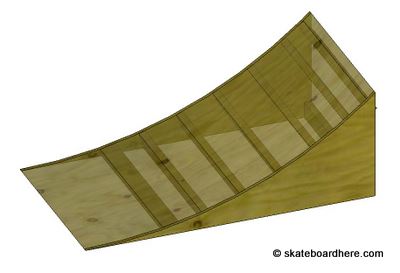 If I could track the evolution of the mega ramp it starts with jump ramps in the 80's. Then skateboard parks all seemed to have a jump box of some sort in them.

At the Slam City Jam contest in Vancouver Canada in 2000. They had a big jump box with a high runway made for getting speed to it. This is when the gaps and tricks started getting huge.

As skateboarders progressed jump boxes got bigger. The runways to get speed for them did to. Longest airs were getting attempted my pros to get into Guinness book of World Records. With this the mega ramp was born and took on a life all its own.

Danny Way got a ramp built in his backyard and started pushing the limits of this for the DC video.

Danny Way jumped the Great Wall of China. The X-Games added the Mega Ramp as a dedicated category. The mega ramp was set in as a fixture of skateboarding.

I don't know where you would go to skate a mega ramp or how many skaters can do it. That’s because the mega ramp launches pros over 30' gaps and into 20' airs.

It is a huge step up from your little driveway jump ramp.

Building a jump ramp is simple. I will throw together some instructions some day.