Some of our first few boards will be a used skateboard. Giving out old decks to skaters who needed them can be a good use of a deck you don't want anymore. Never underestimate the value of a used board to a kid with no money.

I remember what it was like to get the bonus of free gear or a used skateboard.

It was the Best!

So I do it when I can. An old beat up deck to me is a great board to many. So once in a while I will leave an old deck laying at the skatepark for whoever finds it.

When I started skateboarding it was hard to get to a skateboard shop. There were not many of them around. My first board was a Dominion brand from Canadian Tire. Its design was that of the late 70’s. Never the less it worked and I got hooked.

A few summers later I started skating with friends who had “pro” skateboards. They had double kicks and full griptape. I wanted one but couldn't get to a skateshop.

I learned a few things to look at for when getting a used board. 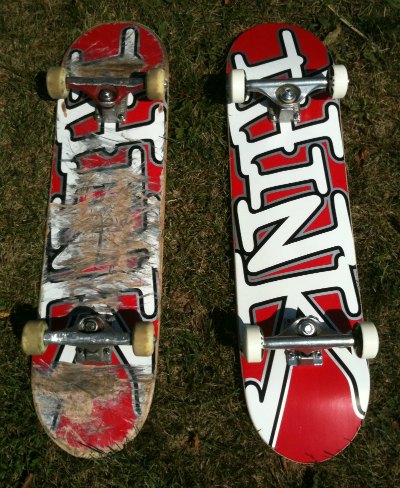 Things to look out for on a Used Skateboard

If your get something for free then take it. Free is a sweet deal.

If you are planning on shelling out a few bucks then look out for these things. Some dead give always that the board is done. Others don’t really affect you all that much.

Cracks – If the deck has any cracks in the top or bottom plys this isn’t good. If the crack is perpendicular to the length of the deck then the deck is about to break. Don’t bother with this or pay like 2 bucks for it. It is pretty much trashed.

Pressure cracks – Cracks at the mounting holes that are parallel with the length of the board are called pressure cracks. Don’t ask me why. That is just what I have heard people call them. They are not a problem. The baseplate of the truck will reinforce them so don’t worry about breaking your board because of them.

Chips – Used Skateboards get a lot of chips. Chips happen when the nose or tail gets smashed and the lamination chips up. Sometimes it will break right off. These can be annoying but are not that huge a deal.

If I get a chip I try to smash it back into place. If if doesn’t squeeze back then I need to remove the chip. Be careful to save the griptape though.

Peel the chip out from under the grip and then stick the griptape back down where the chip came from. This will take care of the problem and leave you skating again.

If the nose and tail are worn down a lot then don’t pay much for the deck. If the board still has its shape but a chip or two. It is still decent.

Delamination – If the wood plys of the used skateboard are separating then don’t bother. It is going to be soggy and on its way to the trash.

Sharp tail – if the nose or tail is worn down until it is sharp that isn’t the end of the board. To fix this for a short while you can grind the board on something rough like pavement. Blunting the tail like this will give it a bit better pop for a while.

Hold the board perpendicular to the pavement and grind it side to side around the edge. Do this to put a bit of an edge back on it. This will dull the sharpness. You get better pop from the board due to less surface area hitting the ground when you ollie. The trade off is that the kick gets shorter and shorter.

Warped – if the board has warped or twisted then it will probably ride and flip funny. Even brand new boards can do this. Some will say that it is because of moisture getting at them in storage but I don’t buy that. I think it is a sign of poor manufacturing. Skate the board but know that it will be a little wonky.

Trucks are pretty tough and will last a long time. In fact I hold on to them the longest. Working in new trucks can often be a frustrating process.

Hangers – There have been times where I have ground the hanger down to the axel. I left a crooked grind groove on the front truck and a feeble grind groove on the back truck. This doesn’t happen unless you are skating a lot! Watch out for shifting hangers. This is when the axle stops to move inside the hanger. With any little bump it will get jered to one side or the other. This leave one wheel really loose and one pinched and seized. It messes up the bearings a bit. You can take the board and tap the loose end of the hanger on a concrete ledge or curb to get the hanger centered again. Tap it hard enough to move the hanger back and spin the wheels to check if it is centered.

If the axles shift you can skate it but it gets to be a pain to constantly tap them centered over and over.

Axel – The threads on the axel can get chewed up, making it impossible to put the nut back on to it. There are a few tools you can get to fix this up. The axle can be bent. Either by one bad accident or by thousands of shocks that eventually bend it out of shape. Most axles have a little bit of bow to them after use. It isn’t much of a problem.

Baseplate – A cracked baseplate sucks. They hold most of the truck and the skateboard together. They will probably fall apart. I wouldn’t bother with them.

Kingpin - Look out for broken kingpins. They can be replaced but it can be a pain. I show you how to change a kingpin on the skateboard trucks page.

Pivot bushing – If they are worn out they aren’t going to ruin your day. They will just make the board a little weird to turn.

Bushings – I ride kind of loose bushings so they last a long time. Some people ride so tight that the bushings get squeezed out of the truck. They are usually squished to crap at that point. Do you self a favour and don’t ride your board this tight.

Coned – Wheels will wear unevenly. They wear more on the outside and at the front and the back. I rotate my wheels once in a while to prevent this. Watch out for coned shaped wheels. They will work but they kind of suck.

Small – If the wheels are worn down until they are basically bearing covers this sucks. In the 90’s small wheels were in style. I guess they thought that they could flip the boards better with lighter wheels. If they are so small that the bearing is showing don’t use them unless you have to.

When I can afford it I give away my used skateboard stuff for free. I just leave it at the park. Sometimes I will give it to a kid whose deck is just destroyed.

After reading this if you want to buy a used skateboard now you know what to look for.