The Dunnville Skatepark
My First Project

Very exciting things are happening for a new skatepark in Dunnnville. 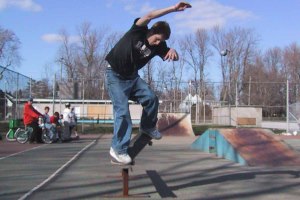 I grew up in a small town in the country. That is where I started the Dunnville Skatepark and skateboard park design in general. We didn't have much to skate. I still remember my one friend saying:
"We need a skatepark!"

I agreed and decided I would try and get one. Many other friends told me to not even bother and that it would never happen. That it couldn't be done. It didn't listen to them. I knew that I could get a skatepark for us all. I just had to show the need and talk to the right people in the right way.

After a lot of work on my part two years later we had a pretty decent place with ramps and lights to call our own.

It took some steps to get there. Check out what I did here:

Having the Dunnville skatepark meant learning so many new tricks and getting much better at skateboarding. Having a place to hang out and spend time having fun with friends. 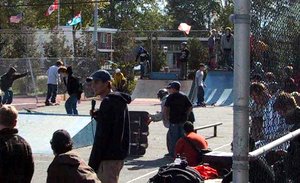 The kids in town flocked to the park. It was not always easy having people use the park. At the time BMX riders were really tough on the ramps. That made it tough to keep things in good shape.

It was a hard on me to see the hard work get wrecked and ripped up by people who just don't care.

The skaters local were great and helped me work on the maintenance when needed.  They worked with me to make it a good place to skate and hang out.

The best times were the once a year skate contest. I would get skaters from all around in attendance. With plenty of prizes and free stuff for the skaters. These skate jams were a blast and I hope to have a place to throw more of them in the future. I even got the contest on national TV. The Concrete Wave.

The Dunnville skatepark process wan't easy and I had to learn a lot along the way. Like most places getting a skatepark the town had never been done. There was not much space and very little money. I had to figure out how to build the ramps and fund raise to get more stuff in the park. To keep it clean and maintained. Keep out trouble makers and lots of stuff. Making alliances with others in the community and working with organizations. It was such a good experience and I miss it.

May hard work did not go noticed. A few years into the project I received an award from the town.

I also received a personal message from the Provincial representative. It was a nice touch. Thanks for the encouragement Mr. Hudak.

I learned a lot making the Dunnville skatepark and I will make a whole section on skatepark advocacy on this website. I want to help anyone who need it to get a skate park in their town.