Play games like skate or best trick with your buddies.

Let me break it up into two parts:

Contests, SKATE, skate or dice and jams get you skateboarding with other people

Video games and online games that let you skate no matter how good you are at actual skateboarding.

Some skateboard games keep you on your board more and some make you skate less.
In the case of some video games, sometimes waaay less.

Get On Board With Your Friends!

These get you competing and having fun while skating with other skaters: 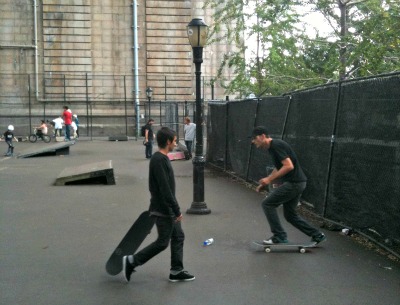 The major players in the skateboard video games have been Tony Hawk Pro Skater and EA SKATE.It was a pleasant surprise to the makers of Tony Hawk Pro Skater that it appealed massively to gamers as well as skaters. It was such a different type of game it just caught fire.

Skateboard games don't really have goals. you just skate around and around doing tricks and combos. So addictive and so fun in the winter months when you can't get outside.

There are others over the years but these were the only real standouts.

Here are some free online games. You may need to install a plugin to play. Something like Flash or Shockwave.

Some of these are not so great, others are kind of fun.
Just waste away the afternoon at work.
If you get caught don’t blame me.

Sometimes I get too lazy to skate cause of all the gaming options. This is bad news.

Always remember that skateboarding for real is WAY better than playing games. The addictive nature of really good skateboarding games can make that hard.

Appreciate the games when it is raining and
when it is nice out,
Get out and SKATE!